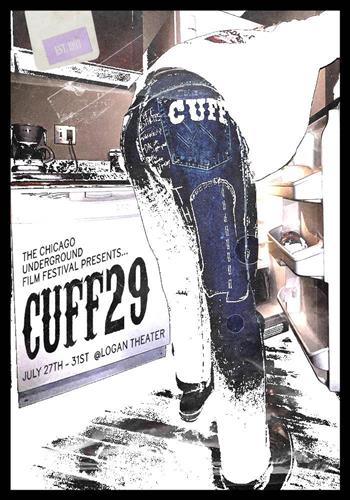 The world’s longest-running underground film festival is teaming up with Unstoppable Domains, OFTV and The Visible Project to bring back five days of movies and five nights of afterparties at Chicago’s historic Logan Theater July 27-31.

A ticket to CUFF doesn’t just give you access to over 100 films and video art, it’s admission to a subculture. With a long history of pushing boundaries, the festival announces this year the formation of the Decentralized Autonomous Organization CUFF (DAO), inviting community members and creatives to actively participate in the future of underground film. Additional programming includes four world premieres, three regional premieres, panel discussions examining crypto and DAO structures through a speculative lens, after-party performances by La Armada at Burlington Bar and The Enigma at Chicago’s Insect Asylum among many others. .
CUFF29 highlights include: Chicago filmmaker Emma Thatcher’s OPENING NIGHT PROVO (world premiere), a first feature film created by queer (mostly female) BIPOC, which tells the story of Liz, an ex- Mormon drug addict living in Chicago who discovers her abusive and estranged father is on his deathbed in Provo, Utah. CLOSING NIGHT film ENDLESS CONTENT FOREVER (World Premiere) from Chicago-based filmmaker Jacob Gregor. Jacob’s narrative debut is an experimental take on consuming endless amounts of content online. Homer Flynn’s TRIPLE TROUBLE (World Premiere) is the first narrative feature film created by legendary and secretive experimental music and performance ensemble The Residents. CIRCUS OF THE SCARS – THE INSIDER ODYSSEY OF THE JIM ROSE CIRCUS SIDESHOW (World Premiere) by Chicory Wees tells how a bizarre group of humans from the Pacific Northwest caused a stir in the early 1990s in the grunge era. LARRY FLYNT FOR PRESIDENT directed by Nadia Szold (Midwest Premiere) is the untold story of one of America’s most notorious outcasts who, in 1983, challenged Ronald Reagan for the presidency and set about testing the limits of parody and the nature of satire in a country that celebrates free speech but punishes those who oppose too loudly. THE LOST RECORD (Midwest Premiere), by Ian Svenonius and Alexandra Cabral and based on the LP by Svenonius (The Make-Up, Nation of Ulysses) and Carbal’s band Escape-ism, is a fantastical essay in sci-fi rock’ n’ roll film about art, music, fetishism, creation, love and records. JONAS IN THE FIELDS (International Premiere) by German filmmaker Peter Sempel is a personal cinematic collage made in memory and in gratitude to the late Jonas Mekas, the great inspirer of independent cinema, art, poetry and the people who was nicknamed the “father of the American Front”. Guard Film.​​”

As CUFF producer Taila Howe said, “CUFF is embarking on one of the most underground things the festival has ever done: transitioning to a decentralized and autonomous organization (DAO) that will be governed by those who hold CUFF tokens, inviting community members and creatives to actively participate in the future of the world’s oldest underground film festival.

While the spotlight is usually on feature films, over 70 shorts are scheduled, including new plays by CUFF alumni Ken Jacobs, Lynne Sachs, Molly Hewiit, Jim Vendiola, Ben Russell and Shayna Connelly. The subject matter of the program ranges from abstract animation to DMT journeys to penile dysmorphia and everything in between.