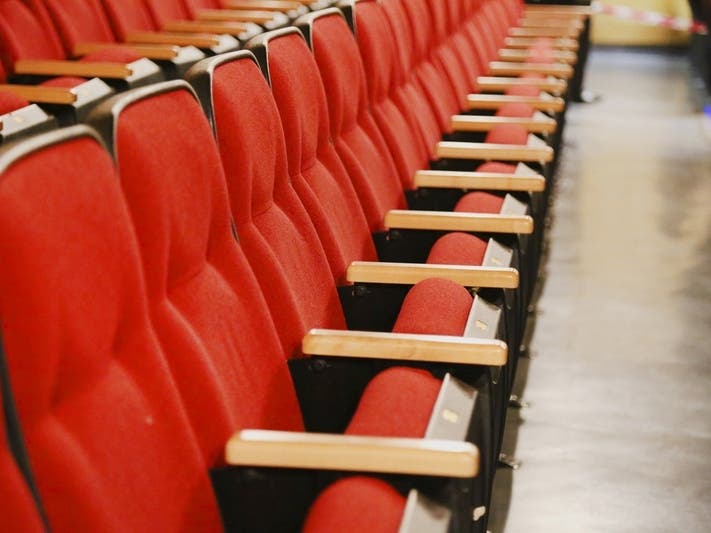 Below are brief reviews of the festival’s busy opening night schedule, featuring the latest from arthouse darling Wes Anderson, a Halloween sequel and a new musical documentary about one of the most revered rock bands. The three films are screened in preview just before their arrival in theaters or on streaming platforms; if you’re one of those enthusiastic moviegoers who like to be among the first to see the latest movies everyone will be talking about soon, the Festival is for you. After this first banner evening, the programming continues for more than a week with film screenings taking place in cinemas, at the drive-in and throughout the city. If you’re ready to attend films in person, consider getting a Festival pass; the Passport includes 20 vouchers for films, while the Moviegoer includes 10 (similar passes are available for virtual screenings). The main thing to remember is that attending Festival screenings is like going to any other movie – you can absolutely land a single ticket to any show, just like you would on a Friday night.

Looking for advice on what to see? Festival Artistic Director Mimi PlauchÃ© shares some of her favorite hidden gems and suggestions in this recent interview. And check out this space: The Third Coast Review film crew has nearly two weeks of headlines to share about what we see and love. Happy cinema day!

Perhaps more than any other Wes Anderson film, his last, The French dispatch, celebrates the art of writing in general and the type of colorful journalism that prevailed in magazine writing in the first half of the 20th century. Technically an anthology piece, the film’s enveloping story involves the death of beloved editor-in-chief Arthur Howitzer Jr. (Bill Murray, naturally), who made it clear that upon his death, the American magazine based in the French town of Ennui-sur-BlasÃ© would cease publication with a final issue containing its obituary, which, when said death occurs, its favorite writers come together to piece together. The resulting issue also contains four stories: a travelogue from Boredom-on-BlasÃ© by notoriously dark Cycling Reporter (Owen Wilson); a play about an insane criminal painter (Benicio Del Toro), the prison guard who also serves as his muse / subject (LÃ©a Seydoux) and the art dealer (Adrien Brody) determined to make the artist a superstar; a first-person chronicle (by a writer played by Frances McDormand) of a student uprising and the writer’s brief affair with one of its leaders (TimothÃ©e Chalamet); and a crime story combined with a fine dining story, written by a character played by Jeffrey Wright (clearly a replacement for James Baldwin).

As if this group of avant-garde actors weren’t enough, the film has dozens of other famous and talented faces (Tilda Swinton is especially wonderful as a speaker guiding us through the painter’s story), and the whole structured affair has an airy quality, with an underlying melancholy for a bygone era. Anderson’s signature visual and written style remains firmly in place, but there is something more festive about his approach with The French dispatch. He’s clearly having fun putting this dense material together and making it palpable, with wonderful detail in the production design, musical cues, and touches of overall whimsy. It ranks with The Grand Hotel Budapest as one of his finest and most comprehensive works, and I can only imagine the film revealing new details with every viewing. (Steve Prokopy)

The film premieres Wednesday, October 13 at 7 p.m. at the Music Box Theater and opens in theaters Friday, October 22.

There have been a small number of bands over the years that have had the distinction of being called “the band your favorite band has listened to”. The point is, the band in question weren’t particularly famous in their day, but have a reputation for being influential, even though they didn’t sell a lot of records when they were together. The Velvet Underground was pretty much the royal family of these types of artists, and they were a bit of a conundrum in terms of how they came together, how they performed, and who was responsible for their revolutionary and ever-evolving style. Having always shown a passion for music in his feature films, director Todd Haynes (Golden velvet, I am not here) edited his documentary, The velvet metro, in a manner similar to the artist who served as producer (perhaps in name only) on the band’s debut album and provided many ideas and materials for their stage shows: Andy Warhol. Like any great artist, Warhol maximized his material: Lou Reed’s distinctive lyrics and performance; John Cage’s adoration for the tonal, hypnotic buzz; Maureen (Moe) Tucker’s regular tribal rhythms; and the booming and screaming guitar work of Sterling Morrison. Warhol launched a striking German model named Nico for his commercial appeal, which the band didn’t like although they eventually accepted Warhol’s vision (which resulted in some pretty memorable music). The film uses a wealth of previously unseen archival material, new interviews with those who were there at the time (including further discussions with surviving members Cage and Tucker), and the result is almost like an oral history of the group. , Warhol’s Factory and its role in the image of the band and a discussion of what it means to be influential. The film is honest about the impact of drugs, ego, and other causes of infighting, and Haynes weaves clips of experimental films from Warhol and other directors. The result is an immersive, trippy dive into a hugely important group that seemed almost destined to die out as suddenly as they erupted onto the New York art scene of the 1960s. (Steve Prokopy)

The film premieres Wednesday, October 13 at 7 p.m. at ChiTown Movies Drive-In, and opens in theaters and virtually on Apple TV + on Friday.

If you weren’t a fan of director David Gordon Green’s 2018 incarnation Halloween (actually a direct sequel to the historic 1978 John Carpenter original Halloween) and I didn’t think you could be more disappointed than this one, brace yourselves. His year late Halloween kills is such a shocking misstep, I’m almost tempted to tell everyone to go check it out just to prove I’m not exaggerating.

Taking place in a single night immediately after the events of the last film (when Laurie Strode (Jamie Lee Curtis), daughter Karen (Judy Greer) and granddaughter Allyson (Andi Matichak) left masked monster Michael Myers on fire in Laurie’s basement), now Laurie is in the hospital stabbed by Myers, whom she believes she ultimately killed. But true to his habits, Michael manages to pull himself out of the flames, kill a dozen first responders in the process, and wreak havoc in the town of Haddonfield, Illinois. Michael is spoken of a lot as an unstoppable force of pure evil. , but since he doesn’t talk or even move much, we don’t really have proof of that. He’s just a mass murderer, plain and simple.

And while murders can be a bit bright and clever at times, it often involves stabbing someone multiple times. I don’t have a problem with onscreen death, but in Halloween kills, it is not at the service of anything. And with Laurie in the hospital for most of the movie, Curtis is barely a force here, which is a real shame. Working from a screenplay by Green, Danny McBride and Scott Teems, the film also stars actors playing the roles they played in the 1978 film or actors playing now adult characters from that work, such as Anthony Michael Hall as the babysitter of Laurie, Tommy Doyle, or Will Patton as Officer Hawkins, who was apparently part of the original team chasing Michael. (One of my favorite cameos belongs to The beta test director Jim Cummings, who also acts as an officer who is killed by Michael in 1978.) And don’t even get me started on how they insert moments into the events of 1978 that involve actors who are no longer with us . Halloween kills is an empty exercise of the worst kind of nostalgia, with a lot of blood but almost no fear, and a story so dependent on the first film it stinks of despair. And we still have one to take away. (Steve Prokopy)

The film premieres Wednesday, October 13 at 10 p.m. at the Music Box Theater and opens in theaters and virtually on Peacock on Friday.

Did you enjoy this post? Please consider supporting the arts and culture coverage of Third Coast Review by make a donation. Choose the amount that’s right for you and know how much we appreciate your support!

Preview: How to experience the 56th Chicago Film Festival from home (and drive-in) October 13, 2020In “Film”

Your email address will not be published. Required fields are marked *

Notify me of new comments by email.

Notify me of new articles by e-mail.

Third Coast Review is Chicago’s locally curated website specializing in coverage of the arts and culture of the Chicago area. Learn more at thirdcoastreview.com