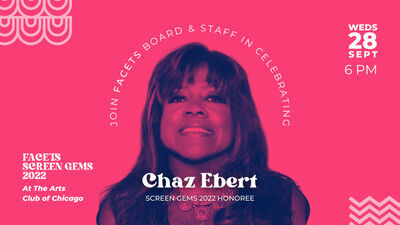 Karen Carderelli, Executive Director of FACETS, said, “Entrepreneur, editor, author, producer and philanthropist Chaz Ebert has spent her career championing overlooked films and filmmakers, providing invaluable opportunities for new and diverse voices. Her work as a film producer, most recently in Rebecca Hall’s “Passing,” has reinforced diversity and change in the film industry. […] And oneAs President of the Roger and Chaz Ebert Foundation, Ms. Ebert’s stated passion is for programs that help break the glass ceiling for women and people of color and provide education and the arts to women, children and to families. We applaud his efforts in the industry.”

Chaz told us that she was surprised and moved that FACETS honored her and that she was happy to participate in fundraising to help FACETS continue its important work of distribution and exploitation of independent cinema started by its founder. , Milos Stehlik. “Milos launched one of the first film libraries in the country,” Ebert said. “Roger has called Facets a temple of great cinema and a treasure for Chicago and the nation. And I’m so happy to see Karen, the board and staff continue to provide an outlet for the International Children’s Film Festival , as well as working with other organizations to support independent filmmaking. I am also grateful to Milos’ widow, Elizabeth, and all of the filmmakers and philanthropists on the Honorary Host Committee who remain committed to the cause. Milos has said the world won’t heal on its own, but teaching good movies can help Milos and Roger both said that through art we can help fight a climate of hate, threats to the environment and open the world to more empathy.