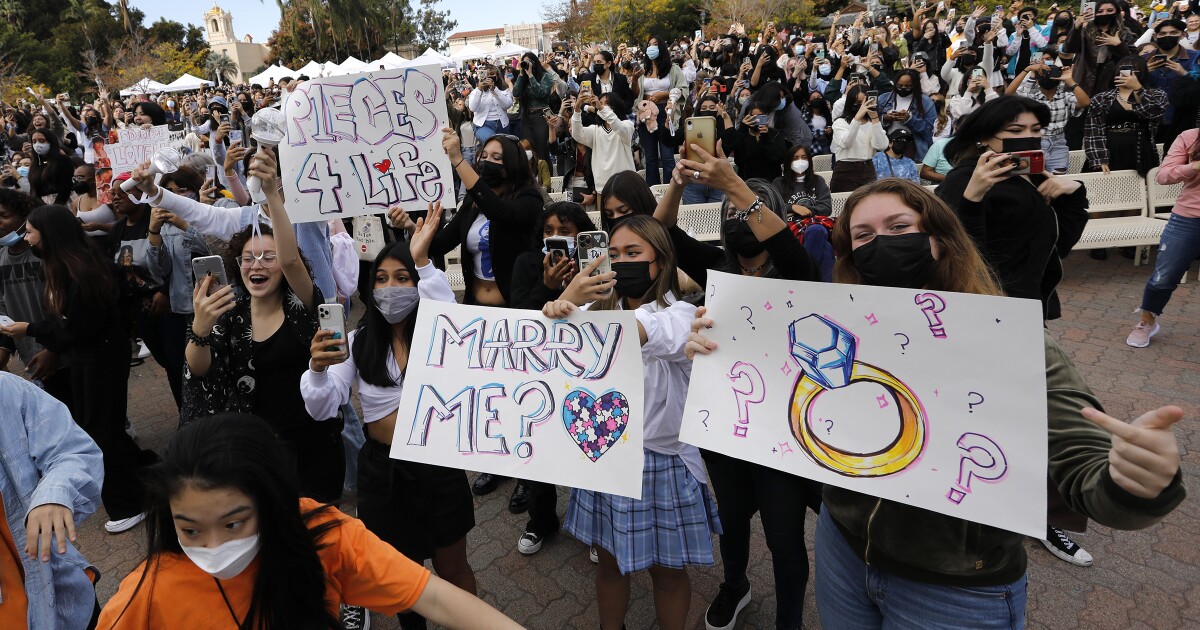 Thousands of people gathered at Balboa Park on Saturday afternoon for Korea Day, a celebration of Korean music and culture hosted by the House of Korea and the Korea Cultural Center Los Angeles.

The day featured 10 performances by K-pop cover dance groups and solo dancers, aimed at emulating their favorite musicians and vying to represent in the global K-pop cover competition. Some of the performers came from as far away as Arizona, Illinois, and Utah, while others were local bands from Los Angeles and San Diego, including CTRL.ALT.SD.

Visitors to the park learned to play Korean children’s games that were featured in the popular Netflix series “Squid Game”, including marbles, Mugunghwa flower bloomed (red light, green light) and ddakji, which is a game. similar to the American. game of pogs. With ddakji, players throw folded origami paper tiles at their competitor’s tile, with the aim of turning them over.

After holding its opening ceremony in August, House of Korea is one of the most recent additions to the House of Pacific Relations International Cottages in Balboa Park.

When she first moved to America in 1985, there was a complete misunderstanding of what her country was and the progress it had made in the decades since the Korean War ended in 1953. People even wondered if there was electricity in Korea.

So, seeing the growing popularity of films like â€œParasite,â€ the new Netflix show â€œSquid Game,â€ and K-pop groups like BTS and Blackpink in recent years, Hwang said, has been both surprising and heartwarming.

â€œI think when the nation has more prosperity, it starts to focus on cultural things, so it’s time to share our culture,â€ Hwang said. “With ‘Squid Game’ on Netflix, it was fun for me to see the reaction of people and all the games I played when I was young.”

The dancers in the K-pop cover dance competition came from many different cultural backgrounds, and many of them described the K-pop community as a niche subculture that is both inclusive and supportive.

San Marcos resident Chevy Rivera, who competed with her dance troupe CTRL.ALT.SD, said K-pop has grown from a single genre to an umbrella term encompassing several subgenres of music and dance. .

â€œYou find your own little pocket in K-pop that you can connect with, and once you find that pocket, it’s addicting,â€ Rivera said. â€œA lot of times, especially if you’re having a hard time, you feel like it completes you and adds that happiness that you can just escape your daily struggles. So I’m not surprised that K-pop is exploding.

Organizer Kenji Kumagai used to share his Japanese heritage with friends growing up, but was often reluctant to share the Korean side, given that so few knew about it.

â€œI have lived in the United States for most of my life, but I have never been represented by any media or cultural thing,â€ Kumagai said. â€œSlowly Korean culture has gained a foothold in the global marketâ€¦ and I’m lucky to see this happening in real time, it’s great.

Kumagai, a spokesperson for the Korean Cultural Center in Los Angeles, said he hopes Saturday’s event not only put K-pop and P1Harmony in the spotlight, but that the public left knowing more about it. the richness of Korean culture as a whole.

“Sure, we love K-pop fans, and we love K-pop doing so well, but we want them to maybe have Korean food, instruments, clothes – maybe also small bites of these, “Kumagai said. “Maybe the main course is K-pop, but maybe a little dessert from the other stuff too.”