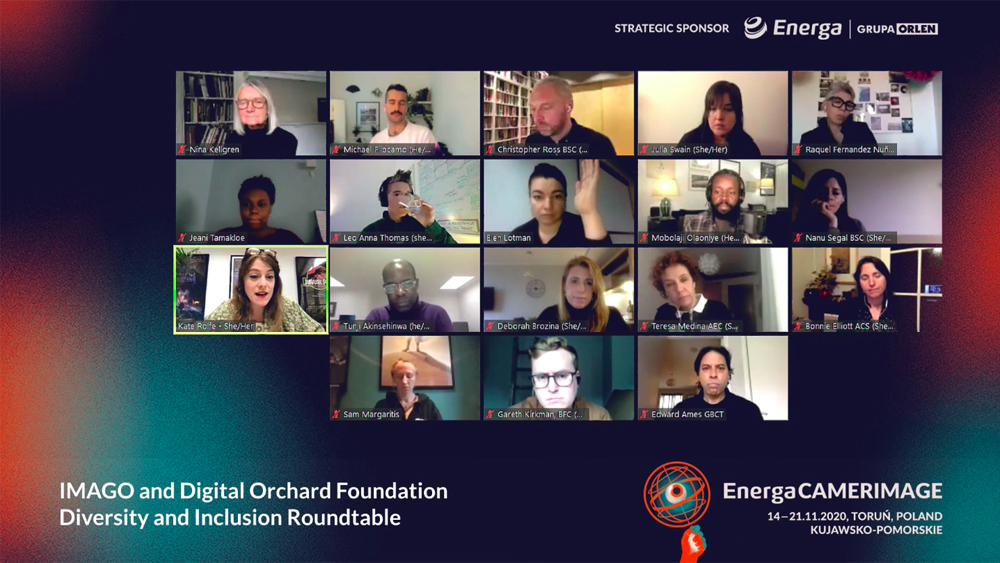 Film crews can be very heteronormative and there’s a lot of toxic masculinity out there, DP Michael Filocamo argued during IMAGO and the Digital Orchard Foundation’s online diversity and inclusion roundtable at Camerimage. Also noting the current situation in Poland and even calling the festival itself.

“As a queer cinematographer, I have been the victim of homophobia by official Camerimage security guards in official Camerimage locations,” he said, mentioning that other colleagues had spat out or forced to change accommodation upon arrival in Poland. But such behavior can also be experienced on set.

“Once I had another camera assistant say to me, ‘Thank God it’s Friday and we don’t need to be with those pink people anymore.’ It creates anxiety,” he said. “We all know high-level queer DPs and they should come out because we need to start talking about them openly. If there’s one thing we’ve learned this year, silence is violence.

ASC’s Bonnie Elliot added: “Women are tired of talking about being ‘women filmmakers’ and I understand that fatigue, but it’s no secret that Rachel Morrison has a wife. She’s a trailblazer. and she’s open about who she is, which is encouraging. I’m not here to date anyone, but it would be wonderful if they made that choice.

As panelists emphasized the need for everyone to see themselves represented at all levels of the industry, using call sheets can be a way to express their identity on set (“Sometimes I paint my nails too. It’s a signal,” Filocamo added) as well as letting others know they can ask for help.

“I’m a mental health first aider and when I was working on ‘His Dark Materials,’ I asked production to put it on the call sheet. They said no, but I ignored them and I wore a t-shirt that said that on the back,” said Leo Anna Thomas, who became a mental health advocate after losing two friends to suicide.

Trying to educate so-called “wellness enablers” with Matt Longley and helping production companies take care of their freelance teams, she aligns the role with that of intimacy or stunt coordinator. “A stunt coordinator would never let filming go on if he thought someone would get hurt. When I talk to producers, their eyes roll over when they hear about ‘breathing techniques’, so I bring up facts and stats, and how much money they’re going to save,” she noted.

Indeed, as discussed during the panel, ensuring sets are diverse and providing a safe working environment can be in the producer’s best interest. Yet, as Nina Kellgren (“Solomon and Gaenor”) noted, the industry hasn’t caught up to the idea that anyone can be a cinematographer.

“Between 1999 and 2016, at BSC, there were only three female members and two black members,” she said. “You could often shoot a director’s first feature and then miss the next one with a higher budget.”

Estonian DP Elen Lotman added: “The first year we held this event, our main slogan was: ‘If you can see it, you can be it.’ We must continue even if we are sitting at home. But so many minority filmmakers coming to Camerimage have seen very specific representation in the competitions, she noted, with Raquel Fernández Núñez.

“We see the same DPs, year after year – what’s going on with the programmers? You check all these signs too and where are women, people of color and queer? It’s not like we’re babysitting on set.

Mentioning different campaigns and new initiatives for more diversity, including #whoisinyoucrew designed by Elliot, it was noted that change must also happen in film crews.

“I realized that I hadn’t worked with as many women as I should have. I didn’t consciously employ them,” she said, emphasizing that everyone needs to step in, including guilds and associations, which always tend to be very exclusive. “They cannot continue to be a clubhouse, because that word already implies that some people are not in the club.”

Arguing that unconscious bias training should be mandatory for anyone in a hiring position, panelists noted that change must start at the top, as observed by Edward Ames, adding that producers need to know who is there instead of going through the same list every time.

“The main thing is to keep the conversation going between the different groups. Unless my queer colleagues and colleagues of color walk through the same door as me, I haven’t done my job,” cameraman Deborah Brozina said. But, as Mobolaji Olaoniye pointed out, hundreds of years of trauma still stand in the way.

“The work we do is impacted by this trauma. The talent is there, what is sometimes missing is the community that encourages,” he said.