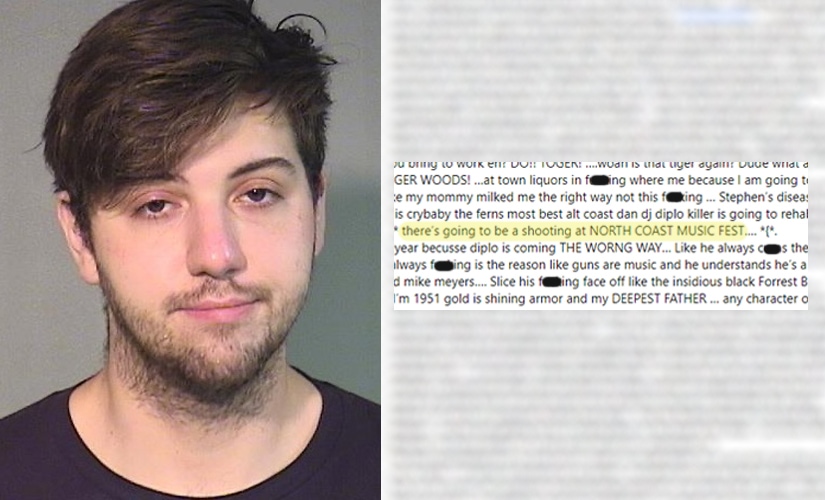 A judge has granted American DJ and songwriter Diplo’s motion for a restraining order against an Algonquin man who allegedly made a shooting threat against a Chicago-area music festival.

Daniel O. Susma, 28, of the 1700 block of North River Road in Algonquin, has been held in the McHenry County Jail since July 12.

A motion filed by McHenry County prosecutors last month said they had uncovered new information since his arrest and were seeking an increase in bail.

A criminal complaint said Susma punched her mother in the face, arms and back, causing red marks and abrasions.

He also allegedly used his hands and applied pressure around the woman’s nose and mouth, preventing her from breathing, according to the complaint.

Susma clawed at her mother’s arms and repeatedly pushed and kicked her in the back, according to the complaint.

He also allegedly struck the woman in the face repeatedly with his hands, causing red, swollen abrasions on her face, according to the complaint.

She reported that Susma grabbed her arm and destroyed the phone she was holding.

Police responded to the incident and took Susma to hospital where he was involuntarily committed, Newman said.

He was released a week later and eventually allowed to return to his mother’s house.

On July 6, Susma reportedly posted on Instagram and Facebook that “there was going to be a shooting at the NORTH COAST MUSIC FEST,” according to Newman.

Organizers of the Lollapalooza Music Festival contacted the police about the posts because Susma had been a volunteer with Lollapalooza for nine years.

Susma noted on social media that he had also volunteered at the North Coast Music Festival.

Police questioned Susma about the posts on July 8, and he alternated between providing reactive responses and “offering disorganized random statements,” Newman said.

Susma then told the police that he “wants to see a shooting so he can film it” but that he “doesn’t want to shoot anyone”.

The day before police told him about the posts, officers were called to LifeTime Fitness in Algonquin after Susma allegedly threatened customers and had to be escorted out, Newman said in his motion to raise bail.

Susma was eventually arrested and taken into custody after the domestic attack involving his mother.

In a statement released last month, the North Coast Music Festival said it was aware of an individual who allegedly made threats against other people and musical artists.

“Unfortunately this has become commonplace these days. NCMF takes any threat very seriously. Please be aware that we are in direct contact with all law enforcement who have encountered the individual and are treating them with the utmost seriously,” the organization said.

“Furthermore, that person will be prohibited from purchasing tickets or entering the NCMF. The NCMF and law enforcement will continue to monitor the situation closely,” the statement added.

The festival is due to start on September 2 in Bridgeview. Organizers said additional security will be at hand.

Thomas W. Pentz, known by his stage name Diplo, is scheduled to perform at the festival.

Pentz filed a motion for a non-contact harassment order against Susma in McHenry County Circuit Court on July 18.

“I’ve never met the respondent and I don’t know why he’s posting about me on social media, let alone threatening me and the music festival I’m scheduled to perform at,” Pentz said. in the petition.

Pentz said he feared for his safety and that of those around him.

North Coast Music Festival partner Chris Den Uijl said in court papers that “hundreds of people” who were due to attend the September festival expressed reluctance to attend following threats.

Uijl asked the court to enter a non-contact harassment order protecting the festival from Susma.

Earlier this month, McHenry County Judge Jeffrey Hirsch granted the order, which requires Susma to stay at least 500 feet from Pentz and his workplaces, which includes the North Coast Music Festival.

Hirsch also ordered Susma not to post any harassing or threatening writing on social media or any public forums regarding Pentz or the festival.

On Friday, Susma was found mentally unfit to stand trial for his battery charges.

A judge ordered that he be placed in the custody of the Illinois Department of Social Services, which will determine appropriate treatment.

A status hearing is scheduled for September 30.

2022-08-21
Previous Post: The EFA announces the first part of the European Film Awards 2022 selection
Next Post: Details of recently secured contract to keep Lollapalooza in Chicago for 10 years – NBC Chicago