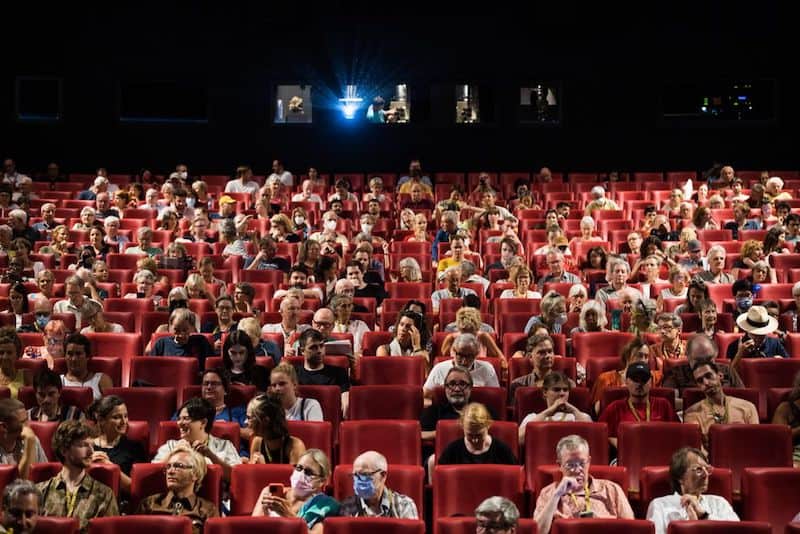 Did I mention last week that being at the Locarno Film Festival is like returning to an intimate and fun summer camp every year? This is where you meet old acquaintances in the beautiful setting of Lago Maggiore and its green mountains, except you can see movies all day and all night and meet their creators. All this with an incredibly precise and friendly organization, but after all we are in Switzerland.

In years past, when Locarno was considered “the smallest of the big festivals” (Cannes, Venice and Berlin), there were very big stars present, what the French call Sacred Monsters, masters of established talent. Actors like Gérard Depardieu, Faye Dunaway, Alain Delon, Adrien Brody, Armin Mueller-Stahl, or directors like Michael Camino from “The Deer Hunter”. It was the time when movies told stories that fascinated and captivated you from beginning to end. When you sat in the dark and were taken to another world, created with real talent.

But then Locarno had a long and winding history – the festival is in fact 75 years old – with a reputation for being too left-wing in the 1950s under programmer Vinicio Beretta who brought in many works from Russia and Eastern Bloc countries. In the 1960s, she screened her films in the gardens of the Grand Hôtel. It was not until 1971 that the screening location was moved to the Piazza Grande by the architect Livio Vacchini, under the tutelage of Moritz de Hadeln (later director of the Berlin festival) who also ensured that the selection films to be more balanced between public interest taste and independent films.

In the 1980s, David Streiff multiplied retrospectives and introduced the public to distant countries such as Iran and China, which amounted to 100,000 spectators. In the early 90s, Marco Mueller (later director of the Rome film festival) took the reins to make the festival even more viable by adding a film market to solidify its commercial appeal. (credit: Bernard Lechot, 2002)
And it continued through a flurry of directors who seem to have taken this once small but renowned festival into even more experimental and ‘open door’ territory, handing it over to young first-time hopefuls who are using this important venue as their a stepping stone to their future. The problem is that everyone feels they can make a film today, but it’s not certain. Many of them are neither polite nor responsible for the images they create in this great world of cinema, probably the highest art form of the 20th and 21st centuries. At least that’s how I felt this year.

There were plenty of movies that were sad, with appalling, unhelpful dialogue or more often gutter language that’s become the fashionable speaking mode these days (like the edgy “Medusa Deluxe,” which Variety called of “hottest property”!). There were works that were experimental (didn’t we go through the 60s ones?) and boring, like the Contest entry, “Human Flowers of Flesh”. Others were simply designed to supposedly break taboos, while they were simply vulgar and insulting to intelligence and sensibility, like the atrocious shorts that were shown in the Pardi di Domani section. A short film titled “You have to watch the fire or burn in it” had the director waiting for the day when she could kill anyone who disagreed with her, while starting fires everywhere. An Iranian short, titled “Mother Prays all Day Long” (of course she does, with such a girl!) was so shamelessly pornographic it was sickening and shocking. Is it what we look forward to in our tomorrows – shock value? As the saying goes, “It’s not what you do, it’s how you do it”. With many films to be released, it had become quite depressing.

But then there were the positives to fall back on – the big Forum get-togethers where you could meet special guests such as actor/director Matt Dillon (“The Outsiders”, “Crash”, “Drugstore Cowboy “), who talked about the many directors who had influenced him, and the great German actor Udo Kier, with the amazing pale blue eyes, who was in Locarno with Leon Prudovsky’s touching Israeli film, “My Neighbor Adolf”. With his strong presence and sharp humour, he delighted the Forum.

The icing on the cake was the presence of Alexander Sokurov, the great Russian film master (“Russian Ark”, “Father and Son”) who was there with his latest film “Skazka” (“Fairy Tale”), in the programming of the Competition. . The film is a stunning portrait of leaders and dictators such as Stalin, Hitler, Mussolini, Churchill, Napoleon, and even a weary Christ wandering around in some sort of purgatory. The CGI – computer generated imagery – is quite brilliant, while their vague conversations can be disconcerting at times. But the haunting waves of their followers and the overwhelming music penetrate the senses hypnotically, showing just how much evil still persists, especially with the support of these masses. While not his finest work, the film does provide a sense of disturbing odds throughout history.

And of course there were the evening screenings in the Piazza Grande, with some good films and some duds. The most enjoyable event, however, was this year’s retrospective on Douglas Sirk, the late German-American director who made such schmaltzy 1950s melodramas as “Magnificent Obsession”, “All that Heaven Allows” and “Imitation of Life”, usually featuring Rock Hudson. . The revelation of this well-curated retrospective was his first German-language films of the 1930s and 1940s, before he moved to Hollywood, which were absolute delights. This is where we came to refuel and regenerate after the disappointment of the new batch of movies.

And finally beautiful actresses such as Juliette Binoche and Sophie Marceau showed up with their films. They were a treat, unlike their overrated films – “Paradise Highway” for Binoche, and “A Woman of Our Time” for Marceau, both screened in the Piazza Grande.

Locarno is only 5 hours by train from Geneva – either via Domodossola, which takes you through the charming Cento Valle, or via Olten/Bellzona.

Try it next year – it’s a cinematic adventure.

Neptune Ravar Ingwersen does many film reviews for publications in Switzerland. She watches 4-8 movies a week and her goal is to sort out the wheat from the chaff for readers..