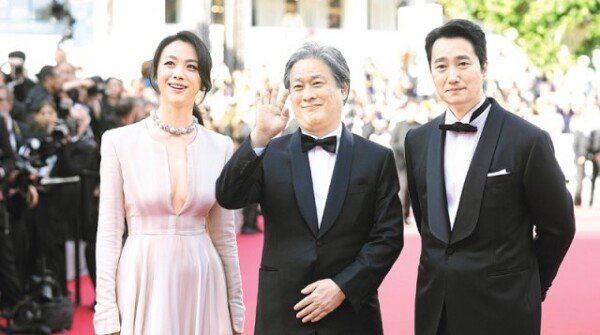 Director Park Chan-wook is back with his new film “Decision to Leave” six years after “The Handmaiden”. Moviegoers and tourists gathered outside the Lumiere Theater in Cannes, where Park’s new film premiered at the 75th Cannes Film Festival on Monday (local time). “Park Chan-wook is the best director, who knows how to put a stylish spin on a social phenomenon,” said Annabelle Puder, an office worker, who was looking for a ticket to Park’s movie holding a sign that read, “Decision to leave” in Korean.

The 2,000-seat theater was filled with spectators from around the world dressed in tuxedos and dresses. The “Decision to Leave”, Park’s fourth film at Cannes, was completely different from his previous films. The Cannes-loved South Korean director told a press conference with South Korean reporters on Sunday that his new film may be a bit bland compared to his previous works because it’s not as sensational, adding that he wanted to make an elegant and classic film.

The film centers on the relationship between detective Hae-jun (played by Park Hae-il) and Chinese woman Seo-rae (played by Tang Wei). When Seo-rae’s husband dies by falling off a cliff, Hae-jun launches an investigation, identifying Seo-rae as the prime suspect. Seo-rae isn’t upset by her husband’s death. “I was worried if (my husband) didn’t come back from the mountains. I was afraid he would die eventually,” Seo-rae said in awkward Korean. As evidenced by the 2007 film, “Lust, Caution,” Tang Wei plays the character with this mysterious gaze. His game, which finely adjusts the level of tension with his eyes, is one of the best in the world. Hae-jun works undercover to keep an eye on Seo-rae, but his gaze watching her through a telescope is more like careful observation filled with concern and affection. Through repeated use of zooming in and zooming out with unique camera angles, Park captured in great detail how Hae-jun and Seo-rae’s relationship and mentality change.

The film, which deals with a murder case that occurred in the mountains and at the sea, unfolds in an unpredictable direction. As Park is referred to as the “directing genius”, it makes it clear in the film that the director worked hard not to waste a single prop. The hazy atmosphere adds to the film’s classic beauty as if Kim Seung-ok’s “A Journey to Mujin” was cinematic. Park emphasized “dignity” ahead of the screening, saying, “I was aiming to make a mature film.”

The film received mixed reviews from audiences. Some said the film was the best in terms of cinematic aesthetics while others said the story was hard to follow. “Every description of the film was vivid and beautiful,” said David Litback, who works for a film studio in Los Angeles. “Everything came together in harmony.” A French audience, Alto Miller, said: “Director Park’s direction is one of the best, but the film was complicated with too many plot lines and scenes. The story got harder to follow as it came to the end.