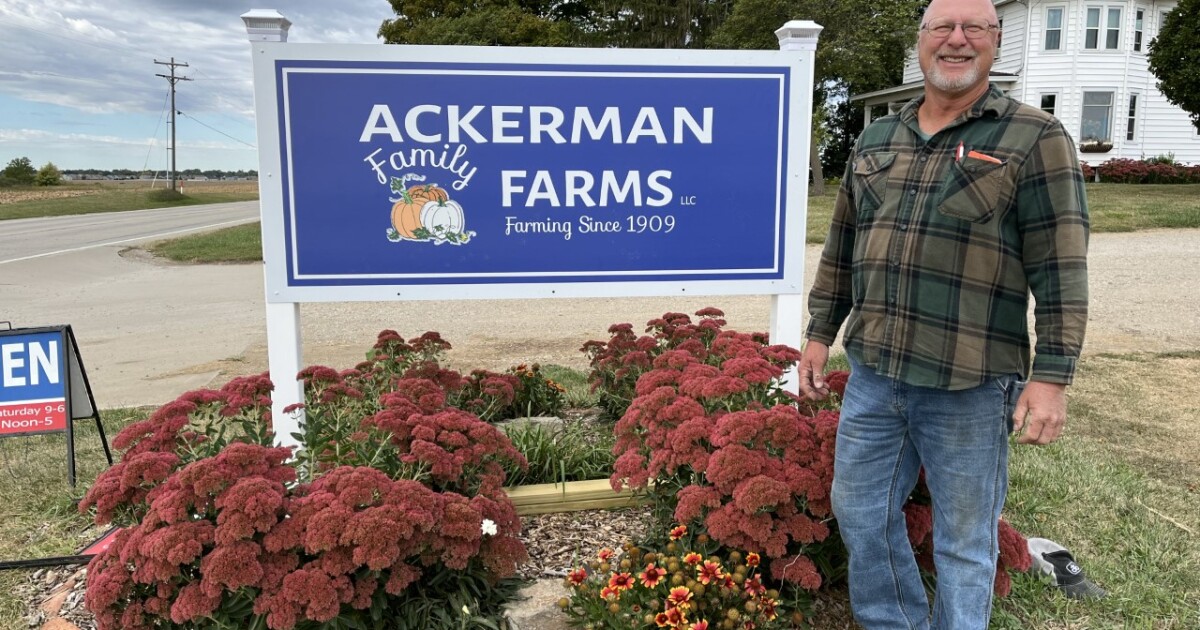 John Ackerman has owned and operated Ackerman Family Farms, just outside of Morton, for 23 years. Before the pumpkins, he grew up on the same farm, but a difficult period in the 90s forced him to turn to another type of crop.

“We tried some specialty crops because we thought we could intensively manage the acres where we grow fresh cut flowers, but it’s hard to get people to stop on the highway for just one thing because that you can get fresh cut flowers from other places,” he said. said. “We’ve done roadside sweet corn with some success, but again, not enough to feed a family of four. Turns out my kids want to be fed every day.

In 1998, Ackerman had grown canned pumpkins to sell at Libby’s, but ended up with a few more.

“So I just took them home for my kids to see when I got off the bus. People started to stop and say: Are these for sale? said Ackerman. “And of course I said, ‘You bet they are. So we decided this was the start of a business.

In 1999, Ackerman Family Farms had just over an acre of pumpkins, with about 20 varieties and a bell on a straw bale you could ring for service. Today, the farm spans 30 acres and grows 160 varieties of pumpkins. It includes a corn maze created with GPS technology, a range of animals from donkeys to peacocks, and weekend hay rack rides.

“We went through the Pumpkin Festival. We had a football tournament nearby,” he said. “We’ve had very busy days here.”

Although the additional business has grown over the years, Ackerman’s priority is product. He describes himself as a “pumpkin geek”.

“Let’s see, Pumpkin Fun Fact LLC,” he says, recalling some of his favorite things about pumpkins. “They’re still finding it (new varieties) in pockets of the world that haven’t been discovered for a long time. You also breed new ones all the time. But here’s my weird fact: I guess I’ve heard that if you grow the biggest pumpkin in the world in any given year, you could sell the seeds of that pumpkin for between $100 and up to $1,000. seed.

He said up to 30,000 pumpkins are harvested by hand to be sold to the public as on-farm decorations, while many more are harvested in a two-step process that brings the pumpkins in a cart along the road. a conveyor belt to be sent to a canning and processing plant.

Although the pumpkins rank very high, Ackerman said another favorite part of running the farm is the people.

“I love people. I love talking to people. Obviously I’m an extrovert but I even miss it a bit, well, we’ve grown up, I kinda miss that you can’t talk at all the world that comes in,” he said. “But everyone has a story.”

The farm employs around 25 to 30 people to operate. Many of these employees are local teenagers and students. Ackerman said he was proud to be able to provide the children with an opportunity for their first job.

“It’s just a way of trying to maintain that, being full-time farmers,” he said. “And now we’ve had three or 400 other teenagers working for us, and now they’re bringing their kids back to the farm.”

This is just one of the ways Ackerman said the agritourism business contributes to the community. As another example, he tells a story of the early years of the farm.

“After 9/11 nobody came to the farm, everyone was glued to the television. The next day, no one came to the farm. And I thought, ‘Wow, this tragedy that happened in New York even affects a tiny little pumpkin farm in the middle of Illinois,'” he said. “But the next day, everyone went out. Because it was a day they wanted to get away from all the stress and horror of what had happened. And we felt so good that we had a place where people could do that.

Over the years, the farm has worked to balance a growing clientele and the desire to be a family business. Ackerman said the farm will have to keep walking the line and adapt as it continues to grow in the future.

“There are trade issues coming up, like raising the minimum wage. I can make you a case for or against,” he said. “But what I do know is that it’s our biggest expense here, and it’s going to roughly double over a six-year period. What future for that? If we have a bad harvest here? Is this going to be the thing that ultimately, you know, is there an endgame? Or is it going to be something we pass on to the kids? »

While there may be challenges in the future of the farm, one thing is certain: Ackerman won’t get tired of growing and eating pumpkins anytime soon.

“I actually ate pumpkin soup last night,” he said. “So I really, really like it. I remember I was making maple syrup at the time. And they said after you’ve been in the sugar shack all day, you want to eat pickles at the sugar shack. ‘dill. But pumpkins, you can’t get enough of them. I don’t think I’ll ever want to eat pumpkins.

You can find more information about Ackerman Family Farms, including hours and events, here. You can also find a list of other agritourism businesses across the state here.