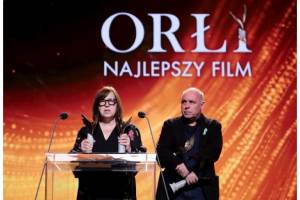 This year, no less than 71 productions competed for the prestigious Eagles – Polish Film Awards in the main competition.

leave no trace by Jan P. Matuszyński received the most nominations (13), followed by Wojtek Smarzowski The wedding with nine nominations, and Łukasz Ronduda and Łukasz Gutt Fears with seven nominations.

At the gala on June 6, 2022, there were also gestures of unity and support for Ukraine, which is fighting against Russian aggression. The guests gathered at the Polish Theater responded to the call of the President of the Polish Film Academy, Dariusz Jabłoński, by joining the association STOP RUSSIAN WAR! action, raising cards with such a message during the ceremony.

Viewers were also able to see and hear Ukrainian director and screenwriter Oleh Sentsov, who thanked his Polish filmmaker friends and the Polish people for their help and support, pointing out that Poland has become a kindred nation to Ukraine.

Best Original Score:
Marcin Masecki for Back to Legoland / Powrót do Legolandu

Discovery of the year:
Łukasz Gutt for the direction Fears / Wszystkie nasze strachy (Poland)
Directed by Łukasz Ronduda, Łukasz Gutt
Directed by Sercé
With the support of the Polish Film Institute (PISF)