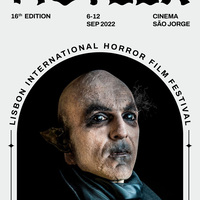 MotelX ended yesterday in Lisbon, Portugal. On Sunday evening, the prizes were awarded with particular attention paid to feature films.

Next, to demonstrate that MotelX audiences have impeccable taste, the People’s Choice Award went to Joseph and Vanessa Winter’s brilliant horror film, Deadstream.

Reviews of both films are available in the links below. The full announcement follows.

“VORTEX”, by Guilherme Branquinho, won the SCML MOTELX prize for the best Portuguese short film, during the 16th edition of MOTELX.

The winners of the 16th edition of MOTELX are already known. From September 6 to 12, the Festival presented the best of national and international horror cinema, in a surprising year full of audiences and fans.

The winners of the 5 competitions of the 16th edition of MOTELX were announced last Sunday (September 11), during the closing screening of the Festival, at São Jorge Cinema.

The SCML MOTELX Prize – Best Portuguese Short Film 2022 – the highest distinction granted in Portugal for short films (€5,000), with the support of Santa Casa da Misericórdia de Lisboa, which, this year, lends its name to the prize – has was awarded to “Vortexby Guilherme Branquinho.

The film is based on a problem that, according to the director, “many Lisbon people identify with: not being able to stop the car when you come home late from work”. Starting from a simple idea, “the film gradually enters a spiral of paranoia and almost psychotic frustration”, he explains.

Among 12 short films in competition, the jury – made up of journalist and news presenter Maria João Rosa, artist Surma and programmer, curator and editor Tiago Bartolomeu Costa – chose “Vortexto transport the viewer “on a journey they can’t escape from start to finish – one of the hardest things to achieve in a film and one of the primary goals of the horror genre”. “Reversoby André Szankowski, with a screenplay and interpretation by Afonso Pimentel, received a special mention.

The same jury also decided to award the Silver Méliès Prize – Best European Short Film 2022 to the French “Censor of Dreams», by Léo Berne and Raphaël Rodriguez, for having summarized « the essential ideas of this genre: intuitive, questioning, overwhelming, about us and everyday life ».

“Speak no evilby Danish director Christian Tafdrup, received the silver Méliès prize – Best European feature film 2022. The jury, made up of journalist, author and host Ana Markl, director of the film festival Sélina Boye and musician Tó Trips, chose the film “for the magnificent way it handles tension and touches the wounds of hypocrisy in social relationships”, and left a warning: “Think twice before making new friends”.

MOTELX spectators were sovereign and appointed “Deadstream», directed by the American couple Joseph and Vanessa Winter, for the Public Prize of the 16th edition of the Festival.

To finish, “O Fantasma da Minha Infância”, by Carolina Aguiar, Francisco Magalhães and Pedro de Aires, received the microSHORTS Award, a competition that has already become cult at MOTELX and which challenges the creation of small doses of horror thanks to new technologies. The winning microSHORT “was the one that best matched an abstract narrative with horror and, above all, established an emotional connection”, says the jury, made up of creator and director Ana Correia alias Peperan, screenwriter and actor André Mariño, and the DJ and actor Kiko is hot.

On the 16th edition of MOTELX, artistic directors Pedro Souto and João Monteiro highlight the “10 incredible days”, with “more than 100 films, 70 screenings and hundreds of hours of cinephile conviviality that we have missed so much the last two years. ”.

MOTELX – The Lisbon International Horror Film Festival returns in 2023, from September 12 to 18, at São Jorge Cinema, for its 17th edition.