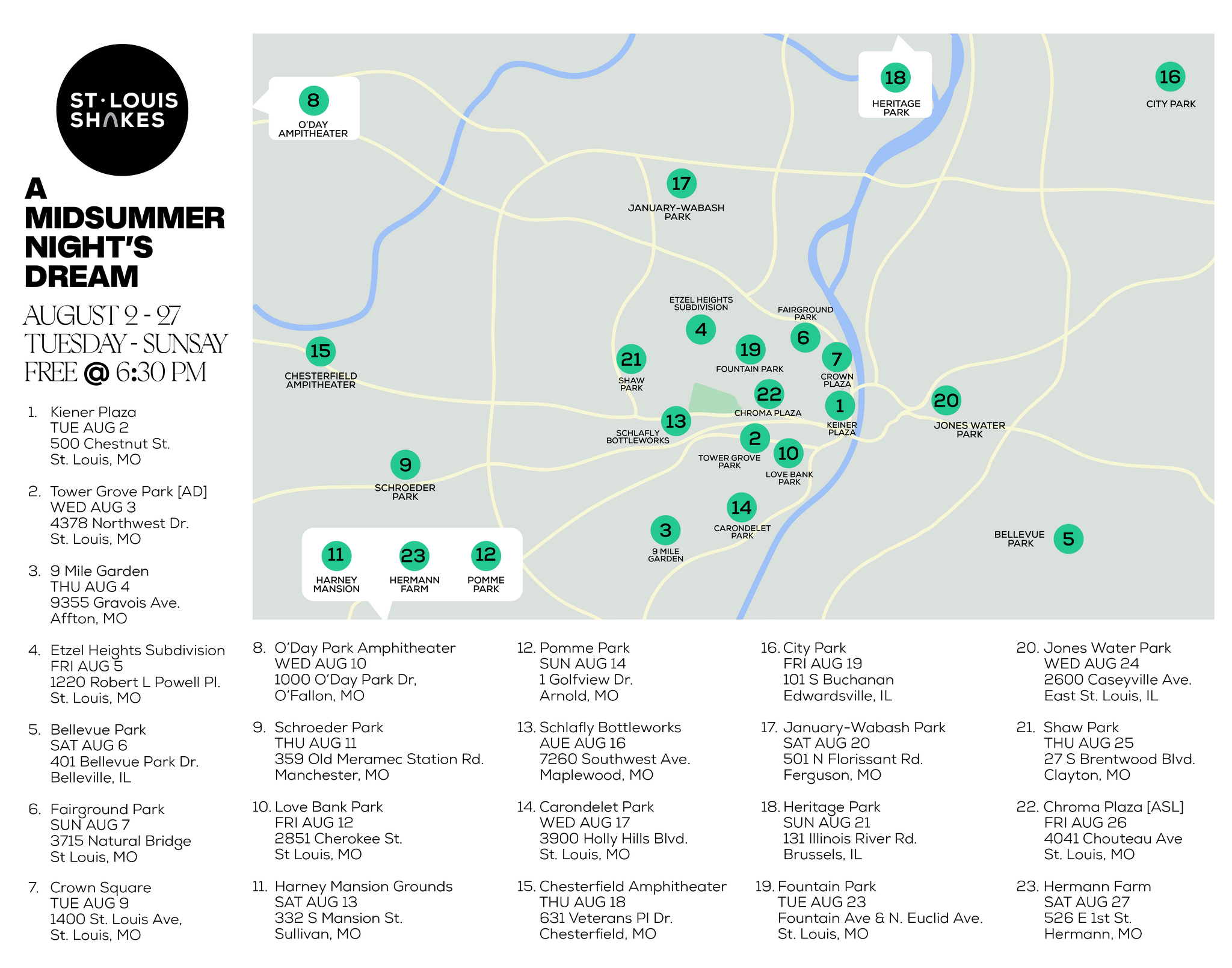 EDWARDSVILLE — The St. Louis Shakespeare Festival tour is bringing its next production to Illinois this summer.

The festival’s “A Midsummer Night’s Dream” will stop in Edwardsville at 6:30 p.m. on Friday, August 19 at City Park on its 24-stop tour of the bi-state region. The 24-date tour includes multiple stops in Illinois, including Brussels and East St. Louis.

This Shakespeare Festival company is packed with artists from the burgeoning St. Louis area, including led by Tre’von Griffith, known locally as a musician and composer as Tre G, fashion designer Brandin Vaughn on the costumes and a cast of six young actors bring to life a new Afro-futuristic musical adaptation of Shakespeare’s classic comedy.

Not only is the show itself notable for its freshness, visiting 24 parks and neighborhoods August 2-27 across the metro area, but it’s one of (if not the) largest free, outdoor Shakespeare tours. in the country.

On Tuesday, August 2, the St. Louis Shakespeare Festival will continue its free Summer of Shakespeare with a family-friendly regional show
visit to “A Midsummer Night’s Dream”. The 90-minute production will begin at 6:30 p.m. Tuesday through Sunday, August 2-27.

“Shakespeare in the Park has always been free and always will be,” said production art director Tom
Crest. “But we knew that for these pieces to truly belong to everyone, they had to be seen and enjoyed not only in the biggest and most beautiful park in St. Louis (Forest Park), but also in the smaller parks of neighborhood that are the heart and center of so many. many of our communities.

“TourCo weaves the spirit and wisdom of Shakepeare into the fabric of our daily lives, where it belongs. And Tre’s enchanting vision makes more people feel welcome in this world than ever before.”

“A Midsummer Night’s Dream” is one of Shakespeare’s happiest and best-loved comedies. The central characters fall in love and fall in love while lost in the magical fairy forest where mischief and interference run wild. But despite all the enchantment and amusement, there is a story of self-love and exploration that is central to this Afro-futurist production.

“I’m so excited to bring Midsummer to all of St. Louis,” Griffith said. “Like the characters in our play, we are enchanted by the setting: 24 parks in the St. Louis metropolitan area that remain largely untapped by the performing arts community. This production will be full of joy, magic, colors and above all love.

“We’re bringing you a wonderful ode to self-expression where all are welcome and we sure hope you find your way to one of the free shows, whether in your own neighborhood or a new one.”

Although this is only the festival’s second public park tour, TourCo continues a 20-year history of traveling productions that previously visited more than 50 schools each spring. This year’s tour kicks off Tuesday, August 2 at Kiener Plaza in downtown St. Louis and continues to Tower Grove Park, 9 Mile Garden in Affton, and Trojan Park in Wellston, all in Missouri. Afterwards, festival production will continue at Bellevue Park in Belleville and return to Missouri at Fairground Park in North St. Louis for the first week.