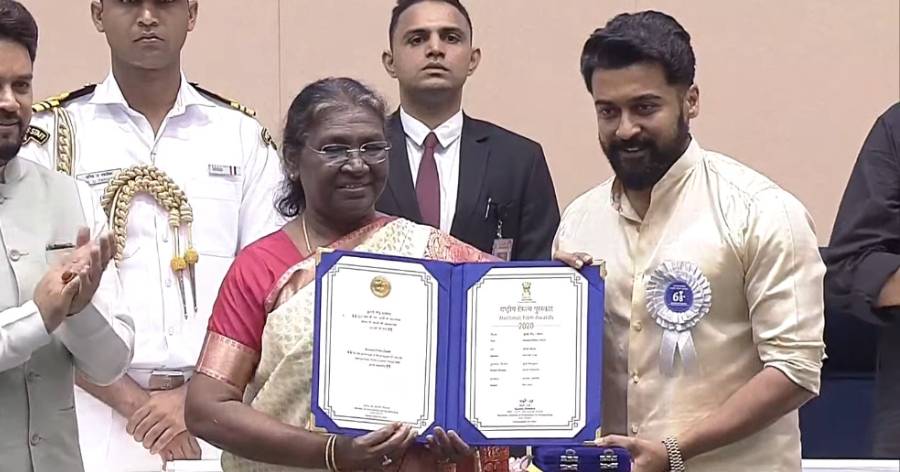 The prestigious 68th National Film Awards for Indian Films of 2020 are announced on Friday, September 30, organized by the Film Festivals Directorate under the Ministry of Information and Broadcasting. Several notable big names have been congratulated with the highest honors and one of them is the leading Tamil actor-producer Suriya, who received the best actor award from the hands of Draupadi Murmu, President of India, for his performance in Soorarai Pottru. The announcement of best actor award to Suriya had come back, who shares honors with the Hindi actor Ajay Devgn for his performance in Tanhaji – The Unsung Warriorwith the National Film Awards ceremony taking place today in New Delhi.

Suriya played the role of Nedumaaran Rajangam alias. Maara in Soorarai Pottru, who is from a remote village and is about to launch his own airliner, and has to overcome many obstacles on his way to achieve his dream. Directed by Sudha Kongara, the film was produced by Suriya and Jyotika under their 2D Entertainment and Guneet Monga’s Sikhya Entertainment banners and also stars Aparna Balamurali, Urvashi, Karunas, Mohan Babu, Poo Ramu, Kaali Venkat, Vinodhini Vaidyanathan, Paresh Rawal among others, and features music by the music of GV Prakash Kumar.

Watch Suriya receive his national award at the 68th National Film Awards in the video below: