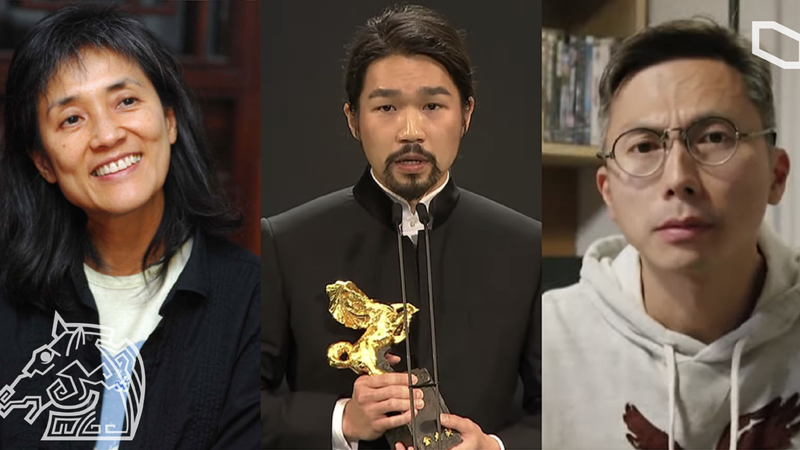 Clara Law, Jun Li and Kiwi Chow. Image of news from the stand. Used with permission.

The 58th Golden Horse Film Awards, dubbed the “Oscars” in Chinese, was held in Taipei on November 27. In 2019, the National Film Board of China ordered directors and actors to boycott the eventSo, for three consecutive years, the film festival had no mainstream Chinese films on the nominations list.

Political pressure from Beijing has also affected Hong Kong. Leading directors and actors in the commercial film industry have been forced to refuse award nominations for fear of losing the mainland Chinese market. Unexpectedly, such tensions created space for independent and less commercial Hong Kong productions.

Best Documentary Award: “The Revolution of Our Time”

The title of â€œThe Revolution of Our Timeâ€ comes from a protest slogan during protests in 2019. Last July, the Hong Kong High Court ruled that the display of the slogan was considered an act of incitement in Tong Ying-kit’s trial. Kiwi Chow’s work has been banned in Hong Kong, as have other films that address the city’s pro-democracy movements and its political tensions with China,

Under the recently amended Film Censorship Ordinance, films that go against the interests of national security cannot be shown in Hong Kong, and anyone who illegally shows unlicensed films could incur three years imprisonment and a fine of HK $ 1 million. Twitter @MenSuen has compiled a list of movies that have been banned or heavily edited for release:

You might remember a while ago we had a movie question-and-answer session #CCP hate it, well here is a new batch of movies made on #Hong Kongfight for freedom. Many have been censored in #HK but that can’t stop the world from watching them. PLEASE ASK FOR THEM AT @netflix ! pic.twitter.com/6gROEYNYIV

Kiwi Chow’s documentary has been criticized by pro-Beijing media for advocating Hong Kong independence after its screening at the 2021 Cannes Film Festival.

Kong Tsung-gan, an activist from Hong Kong, highlighted the audience’s reaction and the director’s video address during the award ceremony on Twitter:

.@RoOT_film wins the best doc at the Golden Horse Awards. After the screening, the audience shouted, â€œFree Hong Kong, revolution of our time! Director Kiwi Chow: “This film belongs to all Hong Kong people with conscience and righteousness that shed tears for HK.”https://t.co/IRmRKwSWEe pic.twitter.com/poZ2iEBkU7

Director Clara Law was born in Macau, raised in Hong Kong and emigrated to Australia. In her film “Drifting Petals”, she revisited the Twin Cities during the 2019 protests and told the story of Hong Kong and Macau through the prism of the diaspora.

Hong Kong and Macau are former colonial cities located on the outskirts of mainland China. In the late 1990s, both were reunified with China under the constitutional principle of “”One country two systems. “Through the traveller’s encounter with protesters and spirits from the past on his journey, the director makes connections between the contemporary conflict in Hong Kong with the 1966 Macau riots against the colonial government of Portugal and the Guangzhou Uprising in 1895 against the Qing dynasty.

While the film does not directly address the 2019 protests in Hong Kong, it is unlikely to be shown in cinemas in Hong Kong, as Lai Chak Ling, an actress in the film who portrayed Law at, pointed out. of the reception of the film festival award:

Jun Li’s “Drifting” is the only one of the three award-winning films to have made it to cinemas in Hong Kong. The film is based on a 2012 court case involving a group of homeless people in Sham Shui Po, a popular district in full gentrification. The lawsuit was brought by a group of homeless people demanding compensation and an apology from the government after police and street cleaners forced them to leave their camps by throwing away their belongings without warning.

The homeless citizens’ demand for a formal apology resonated with pro-democracy protesters in the city during the 2019 protests.

As Michael Mo, a diaspora from Hong Kong in the UK, pointed out, the director used the politically sensitive song, â€œHong Kong Add Oilâ€ é¦™æ¸¯ åŠ æ²¹ when he received the award:

#Hong Kong movie based #Derivative have just won the best screenplay adapted to the 58th @Golden_Horse Rewards. At the end, the director gave his speech in Cantonese, ending with # é¦™æ¸¯ åŠ æ²¹ (Cheer up Hong Kong), a slogan now considered seditious.
Thank you # Taiwan. pic.twitter.com/0JcYdPCGFR

“May you stay forever young” and “Coffin Homes”

In addition to the winners, two other nominated Hong Kong productions were rented by Festival critics.

With a budget of less than HK $ 600,000 (approximately US $ 77,000) in production costs, Rex Ren and Lam Sum’s â€œWill you stay forever youngâ€ was nominated for Best New Director and Best Editing.

The movie was also censorship in Hong Kong, because it is about the 2019 protests. It features a rescue team who searched for young protesters who tried to kill themselves due to generational conflicts within their families.

The title “Will You Always Stay Young” comes from a 15-year-old protester in the film: “Will people be doomed to change as they grow older?” If so, I don’t want to grow taller.

Recognized director Fruit Chan’s â€œCoffin Homesâ€ has been nominated for several awards. The comedic thriller, which premiered in Hong Kong in August 2021, is very critical of capitalist exploitation in the city as the ghosts have to compete for a living space with each other and with the living.