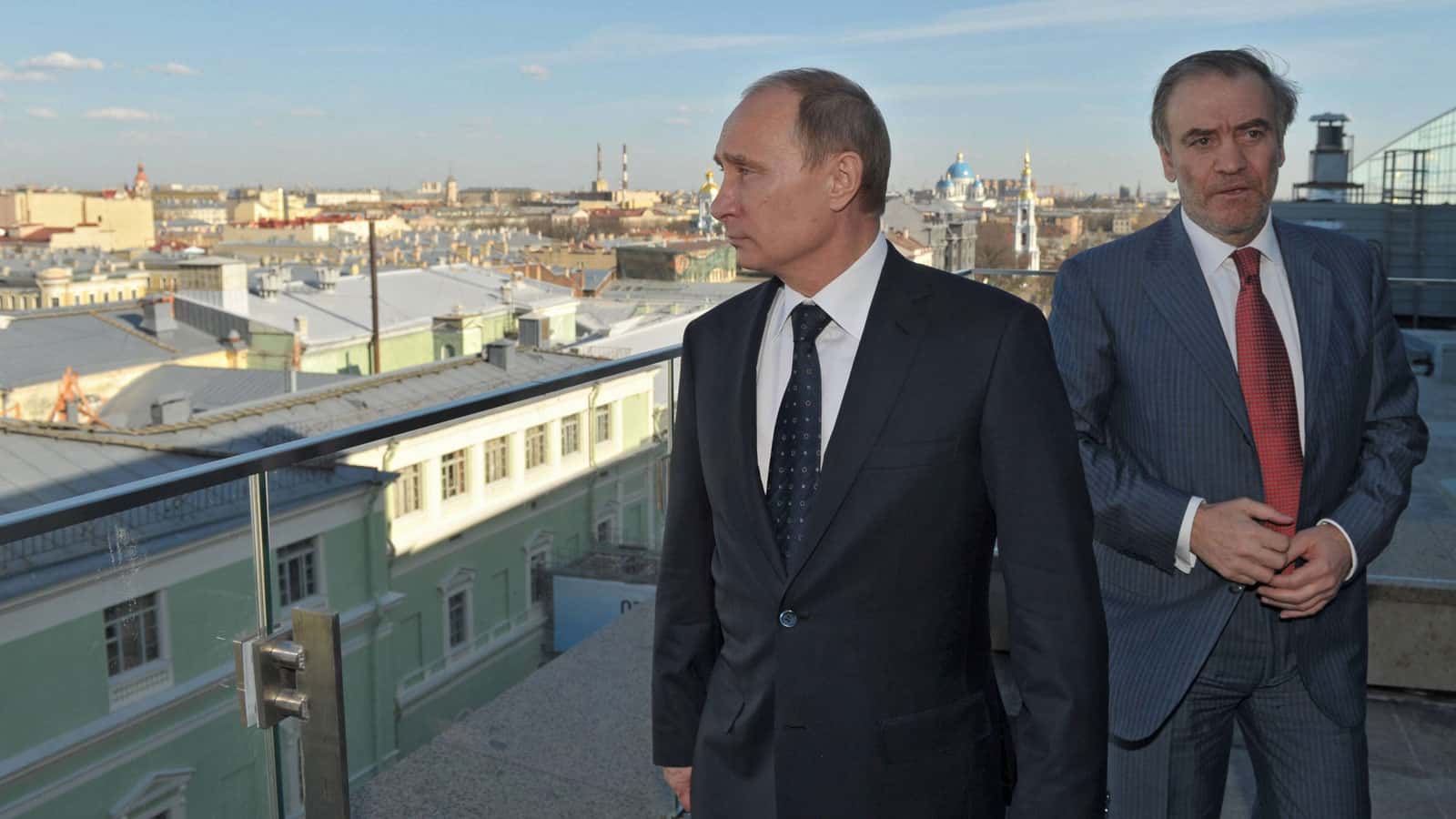 Last week, Dieter Reiter, the mayor of Munich, sent an open letter to Valery Gergiev, the conductor of the Munich Philharmonic. Reiter told Gergiev he had until February 28 to distance himself from the Russian invasion of Ukraine. If Gergiev refused, his contract with the orchestra would be terminated. Some commentators, on social media and in newspapers, reacted with outrage, calling Reiter’s ultimatum an assault on free speech.

Gergiev is not a victim. It is true that he is losing opportunities to perform in New York and Vienna, and music director positions in Milan, Rotterdam, Lucerne, Verbier and now Munich. But he is not the victim of a culture of indignation or an attitude with us or against us. He’s not a victim because he’s not just a musician. Gergiev enjoyed close cooperation with the Russian regime. He personally took advantage of the power of the government. He let himself be instrumentalized. In 2016, he performed a bizarre concert for Russian troops after the conquest of Palmyra, Syria. In 2018, he took part in Putin’s re-election campaign at the Luzhniki Stadium in Moscow. He conducted concerts for the command of the Russian Armed Forces. In Russia, Gergiev’s status is closer to that of Condoleezza Rice, a Bush administration official and Iraq War cheerleader who happens to be a virtuoso pianist, than to most musicians.

The Valery Gergiev Charitable Foundation considers one of its explicit goals to be “to increase Russia’s cultural influence in the world”. Oligarchs and Putin loyalists Gennady Timchenko and Alischer Usmanov sit on the board of the foundation, both of which have been on the European Union sanctions list since this week.

Putin rewarded Gergev’s loyalty by making him the most influential Russian artist. Gergiev has been running the Mariinsky Theater since 1988, and his connections with the regime have turned the institution into an empire with a second stage – the Mariinsky-2 – a concert hall – the Mariinsky-3 – two branches in Vladivostok and Vladikavkaz, and a new theater on the island of Sakhalin.

The festivals, orchestras and opera houses that have disinvited Gergiev or terminated their contracts with him have not mentioned all the details of his complicity with Putin’s system. It was negligence on their part. Without this information, it is easier to build a narrative that a musician becomes an example simply because he is Russian, or that cultural institutions force “apolitical” artists to take political positions.

Most Russian artists should not be forced to comment publicly on the invasion of Ukraine. Valery Gergiev is not most Russian artists. It represents the cultural arm of Putin’s oligarchy. @vanmusicmag Click to tweet

Cultural institutions may have their reasons for avoiding the full extent of Gergiev’s friendship with Putin and his participation in the autocrat’s corrupt power structures. For a long time, classical music willingly participated in the fiction of Gergiev’s double career: powerful politician and friend of Putin in Russia, conductor like any other in the West. “Gergiev refuses to comment on political issues” was the standard line when, to take just one example, opposition politician Alexei Navalny was arrested in 2021, and hundreds of thousands of Russians took to the streets, including many renowned artists. There were also canned platitudes about the “power of music to connect people”. Munich, Germany’s third largest city, employed the richest and most powerful Russian artist; in 2021, by way of explanation, the artistic director of the Munich Philharmonic, Paul Müller, and the Munich cultural politician Anton Biebl, declared that “the dialogue must never stop”.

The fact is that this dialogue never took place. Avoiding harsh conversations was the only way to maintain the semblance of an exchange.

This allowed Gergiev to live his legendary jet-setting lifestyle without concert organizers looking too closely at him. This tolerance continued in 2014, when he tolerated the illegal annexation of Crimea. It took a Russian invasion, with the resulting public pressure and embarrassment of fear, for the promoters to reconsider their relationship with Gergiev.

After Russian troops entered Ukraine, many politicians and pundits realized they were wrong about Putin. They couldn’t believe that real actions would follow his ideologically confusing statements. It would have been better, they realized, to take his word for it: in 2021, Putin was fantasizing about the supposed “historical unity” of Russia and Ukraine.

The same goes for Gergiev. The conductor never tried to hide his close relationship with Putin. “We have preserved our great art. I’m proud of our country, I’m proud of our president, Vladimir Putin,” Gergiev said in his speech in support of the leader’s re-election in March 2018. Gergiev never walked away from dictatorship and its military expansionism . In 2008, he gave a “victory concert” after the war in Georgia.

The only people who saw Gergiev criticize Putin were those who wanted see this. Some saw a coded rebellion in Gergiev conducting Shostakovich’s music. Others believed that Gergiev’s silence on the Ukraine invasion was a sign that he had been pushed into a corner and had no choice but to follow.

But there is no evidence that Gerviev criticizes Putin’s oligarchy or his invasion of Ukraine. In 2015, Gergiev gave an interview to The Spiegel in which he explained his vision of the political world. It was essentially the same as Putin’s alternate history, which was used to justify the invasion of Ukraine. The collapse of the Soviet Union was a disaster; Putin is a source of stability, preventing bloodshed; the Euromaidan protests in Kyiv were part of a plot by Western-backed Ukrainian Nazis to “take a piece of the Ukraine pie”.

Whoops ! An error occurred and we were unable to process your subscription. Please reload the page and try again.

This weekend, a group of Russian artists published an open letter calling for an end to the war – it was worded vaguely, without naming Putin or the Russian military as the aggressors. Vladimir Urin, a Putin loyalist and artistic director of the Bolshoi Theatre, has signed. Not Gergiev. Other prominent and influential figures in the Russian cultural scene have found ways to express their dissent, including many Russian musicians. Gergiev is unlikely to want to distance himself deeply from Putin, and be held back by feelings of helplessness and fear. If so, he probably would have, perhaps speaking with Munich Mayor Reiter or even his (now former) agent, or asking for more time. The Rotterdam Philharmonic managed to join Gergiev, where he has worked since 1988, but after the conversation “insurmountable differences remained”. If he had denounced the invasion in private, the orchestra would at least have formulated its decision in another way.

It is always possible to project complex moral dilemmas onto a character who is silent. But sometimes the simplest explanation is the best. We should take Gergiev at his word. “We strongly support the position of the President of the Russian Federation on Ukraine and Crimea,” read an open letter from Russian artists during the peninsula’s 2014 annexation. Gergiev signed. There is no indication that his views have changed. ¶

VAN is proud to be an independent classical music magazine thanks to our subscribers. For just over 10 cents a day, you can enjoy unlimited access to over 600 articles in our archive and receive new ones straight to your inbox every week.

Not ready to commit for a full year? You can test VAN for a month for the price of a coffee.