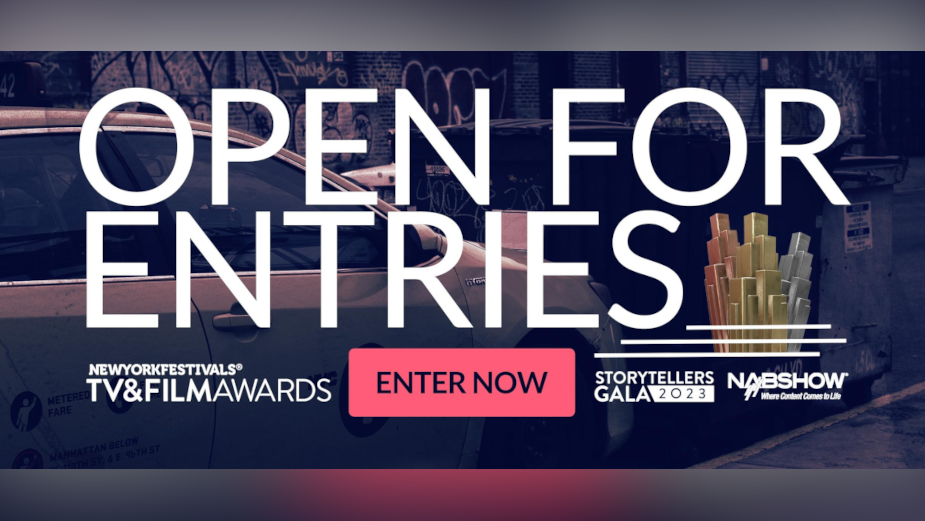 The New York Festivals Television & Film Awards celebrate innovative storytelling from around the world and honor content creators whose compelling programs reach global audiences. The contest’s 65-year legacy provides a showcase of exceptional work across all genres of entertainment media.

For 2023, New York Festivals has updated several categories reflecting the evolving nature of the industry.

“Today’s journalists are finding new ways to keep viewers informed in our interconnected and ever-changing world. Here at New York Festivals, we want to be able to amplify their dedication with categories tailored to these purposes,” said Rose Anderson, Vice President and Executive Director of the New York Festivals TV & Film Awards. “We are thrilled to once again partner with the WaterBear Network to honor documentary filmmakers who use their talents to save our planet. “

Check out the list of TV & Film categories, visit HERE.

The New York Festivals TV & Film Awards has launched a prestigious new award for 2022, the WaterBear Award, a partnership between WaterBear Network that recognizes the highest-rated documentary in the Climate Change & Sustainability, Environment & Ecology, and Nature & Wildlife categories. Together, NYF and WaterBear Network honored ‘Hippo King’ (A Terra Mater Factual Studios / Skyland Productions / Into Nature Productions production in co-production with DOCLIGHTS / NDR NATURFILM / The WNET GROUP in association with PBS and CPB) Nature & Wildlife with the first WaterBear Prize.

For the sixth consecutive year, Al Jazeera English Qatar’s coverage of international issues and diverse themes has earned the network the prestigious title of Broadcaster of the Year. Done+Dusted won Production Company of the Year for 2022.

Due to ongoing global pandemic quarantine restrictions, the winners of the 2022 NYF TV & Film Awards were honored in a virtual ceremony on April 26 during the NAB Show in Las Vegas. The two-part virtual Storyteller Gala Ceremony hosted by Rose Anderson, Vice President and Executive Director of the New York Festivals TV & Film Awards, featured highlights and acceptances from award-winning teams of men and women recording since their hometown in more than 40 countries around the world. .

The 2023 TV & Film Awards Storytellers Gala will take place at the annual NAB Show in Las Vegas on April 18, 2023. This is the 13th year of NYF’s strategic partnership with NAB Show. All NYF TV & Film Award winners have access to the multi-day event which is the world’s largest global gathering for the media and entertainment industry.

The deadline to enter the 2023 Television & Film Awards competition is December 31, 2022. To view entry details and competition rules and regulations, visit HERE. For a full list of 2023 categories, visit HERE.

All entries for the 2023 competition will be judged online and screened by the NYF TV & Film Awards Grand Jury comprised of more than 200 producers, directors, writers and other creative media professionals from around the world. Winning films will be featured in the TV & Film Awards Winners Gallery.

2022-09-07
Previous Post: The New York Festivals 2023 TV & Film Awards are now open for entries
Next Post: BBQ-N-Blues, Homestead and tons of live music for all to enjoy – Shaw Local