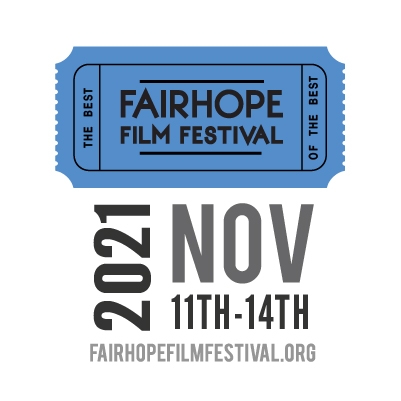 The intermission ends from Friday, as the Fairhope Film Festival returns for its 9e year! Safety precautions are in place as they will be offering in-person screenings, as well as many films also available virtually via online streaming with their virtual film festival.

The Fairhope Film Festival focuses on finalists from last year’s national and international film festival competitions, featuring outstanding foreign films and feature films, as well as documentaries and short films. The festival has a southern flair when it comes to opening and closing events and parties, but special attention is given to the art and experience of making great films.

Most venues are within walking distance of each other, making it an easy event to take for a day or a weekend, as you are also in the picturesque and flowery town center of Fairhope, as well as all the stores which is also available with the backdrop of Mobile Bay.

An added bonus for this year’s film festival, Patjon Dauer (CFO) and Timmy Thompson (co-founder), of Cross Creek Pictures (the studio responsible for producing such film classics such as “Black Swan”, “The Ides of March“, and “The Chicago 7 trialâ€Among other great films) will be present this weekend to give a talk on the production of great films. In addition to the presence of Mr. Dauer and Mr. Thompson, there will also be representatives from the CAA (The Creative Artists Agency) of Los Angeles.

This is a major event for any Gulf Coast movie buff and I recommend anyone who enjoys movies, movies and the art of making movies to attend this very special event.