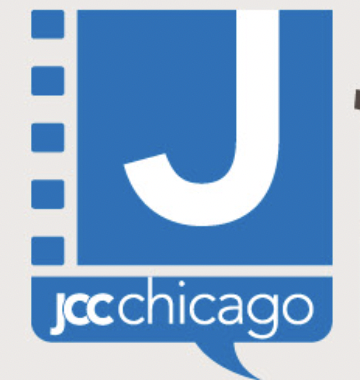 The JCC Chicago Jewish Film Festival, now in its ninth year, will present its second virtual social justice series, featuring five films available for home viewing, including exclusive conversations with filmmakers and subject matter experts after many movies. The series runs from January 14-23, and a special series pass is available for pre-purchase for a limited time.

As North America’s largest Jewish community center, non-denominational and welcoming to all, the philosophy of inclusion serves as a compass at JCC Chicago – and the festival has historically featured dozens of films that address issues of race. , religion, orientation, disability, differences and mental health. This year’s films have been chosen to inform and spark an important conversation.

“Film is a powerful tool to inspire change, and a wonderful way to reach more people. The themes explored throughout this list of films give a powerful voice to the issues of human experience with raw, emotional, sometimes uncomfortable, real-life stories. says Ilene Uhlmann, director of arts and ideas at JCC Chicago.

Series highlights include Once upon a time there was a boy about a family’s struggle with their son’s cerebral palsy, A common goal where player loyalty is in question as half of Israel’s national football team players are Muslim and belly of the beast, directed by Peabody and Emmy Award-winning Erika Cohn. Also, the short film Growing Peace in the Middle Eastwhich was created by a 7th grade student inspired by a visit to Israel, will be presented.

The Social Justice series will officially open on January 14, and the films will be available for home viewing for a 72-hour window through the online viewing platform Eventive. With each rental, households will have access to exclusive conversations with filmmakers, directors and opinion leaders following many films.

JCC Chicago is a non-profit organization inspired by Jewish values, connecting traditions and generations to create a more vibrant and connected community. JCC Chicago is a partner of the Jewish United Fund serving our community.