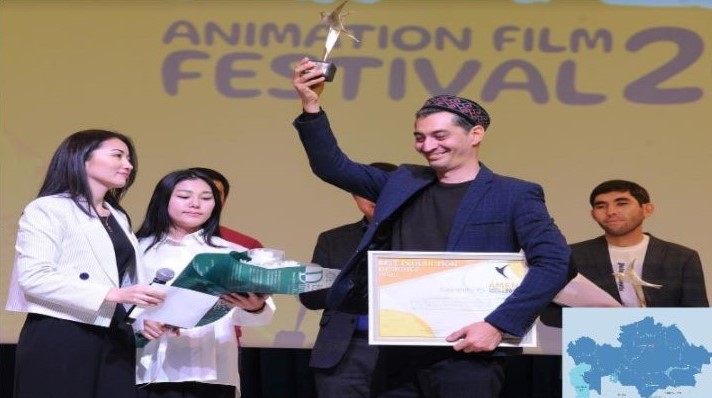 NUR-SULTAN – “The House on Wheels”, an animated short, directed by Azizbek Mukhamedov from Uzbekistan, was named best animated film at the ÃMEN International Animated Film Festival which took place from 29 October 30 in Turkistan, reports the press service of the Kazakh Ministry of Education and Science.

Azizbek Mukhamedov from Uzbekistan directed “The House On Wheels”, an animated short, which won the nomination for “Best Animated Film” at the ÃMEN International Animated Film Festival in Turkestan. Photo credit: festival’s Facebook account. Click to see the map in full size.

The festival is named after Kazakh animator-director Amen Kaidarov, who helped develop the country’s animation industry.

Mukhamedov’s â€œHouse on Wheelsâ€ tells the story of a man whose life changes dramatically when he follows the advice of malicious people.

The winner also presented the film â€œVolshebnyi tanburâ€ (A Magical Tanbur), which won the nomination of â€œBest Production Designerâ€.

â€œIt is an honor to receive this prestigious award. I am encouraged that our work has been greatly appreciated. I am sure that our viewers and the creative group involved in the production of the film will be especially happy to receive this award, â€Mukhamedov said.

The jury for the competition was made up of prominent figures from the domestic and foreign animation industry, including Russian animator Alexander Dorogov, who founded the Animation Institute and has has participated in over 40 projects such as “Nu, Pogodi” (Well, just expect from Russian), “Mulan”, “The Lion King” and “Fixiki”, produced by Soyuzmultfilm, a Russian animation studio, and Disney.

The festival was held in the spiritual capital of the Turkish world, which promotes the spirit of consolidation of the Turkish people with representatives of Kazakh animation and leading animation directors from Turkish-speaking countries proposing to create a unique organization of ‘Turkish animators at its end.

Aday Abilda, who is the general producer of the National Film Support Center, said the proposal was appropriate, saying they had been discussing the creation of such a center for several years. He noted that this platform should bring together experts and animation production companies from Turkish countries.

This is a video clip from the film “Volshebnyi tanbur” (A Magical Tanbur), also directed by Azizbek Mukhamedov, which won the “Best Production Designer” nomination.